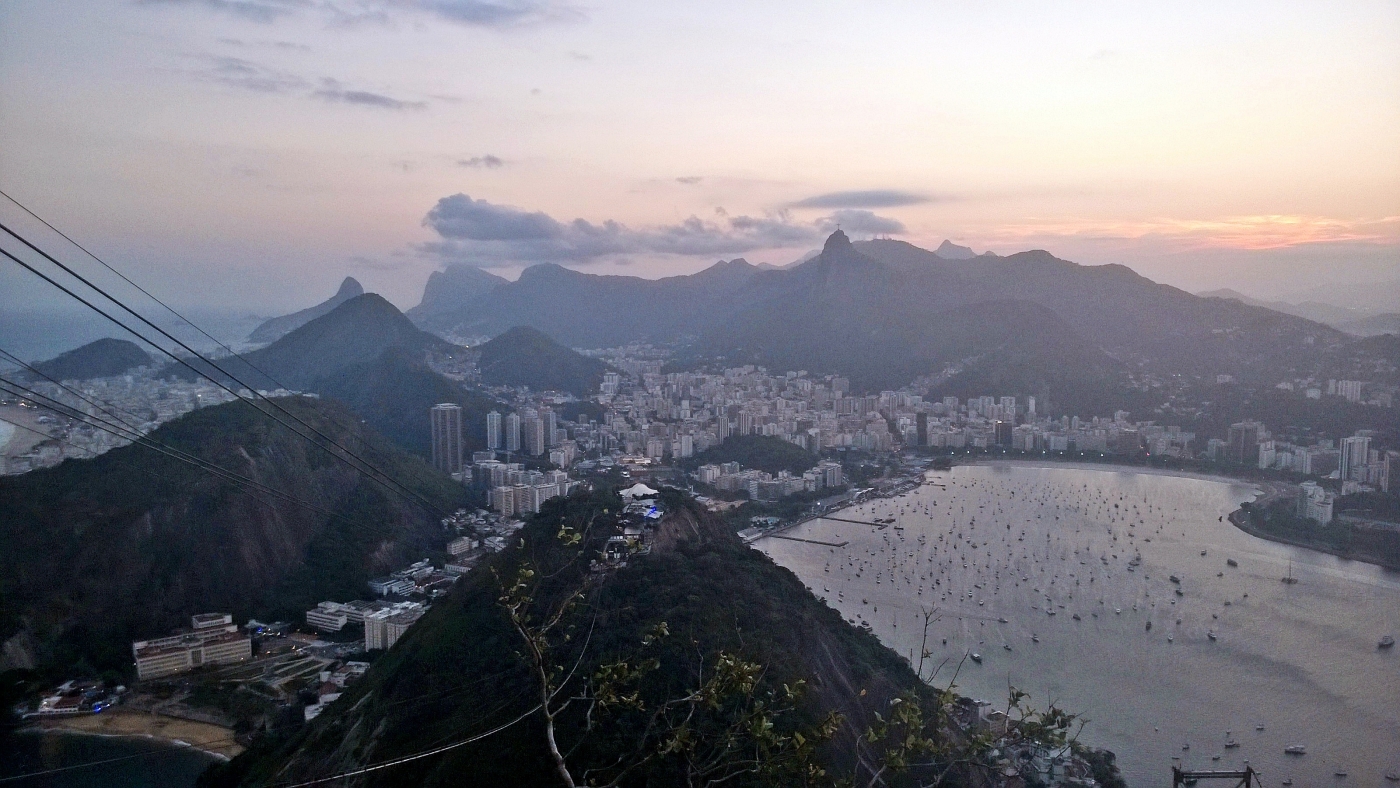 I have been struggling with this post for a while because my experience of Rio was very different from other cities in Brazil. It’s easier to post nice pictures and talk about what you have seen and done as a plain tourist (hopping from one point in the sightseeing list to another), but it is much more difficult to write about something that you lived as a … lets’s say … prolonged visitor. Your experience is not linear anymore: it’s an irregular mix of events, moments and episodes and it is just hard to create a single thread of a story. In my head I have flashes of random memories that are filled with emotions and thoughts, and I don’t really know how to put it all together into one “Rio” post. Nevertheless, I will try. Maybe by starting with the simple things and telling you how I got there.

I came to Rio (and to Brazil in general) to volunteer at the Olympics. Initially I planned to stay in Rio for 2 weeks, but then I was so fond of all the atmosphere that I paid additional 400 euros to change my flight ticket and to stay for some more days. *totally crazy but totally worth it*. In the beginning we have rented an apartment at AirBnb with my friends. It was a very small (tiny!) place close to Copacabana beach in a very lively neighborhood. We were scared even more than usual in Brazil as it was THE criminal Rio we heard so many bad stories about… But we were reassured by our host that the area was safe and eventually we relaxed.

I have never been to Portugal, but in Rio I felt like being in Spain (I guess Portugal and Spain are very similar in architecture). And this feeling of cultural belonging to my beloved Spain made me like Rio from the first sight. However, if I take the words “from the first sight” literally, I have to say that my first impression of Rio was not connected to its architecture but to its stunning landscapes! We were very lucky to arrive to Rio landing in a small airport right in the heart of the city and observing mind blowing coastline and hills! Have a look at this picture from the plane, isn’t it fascinating? 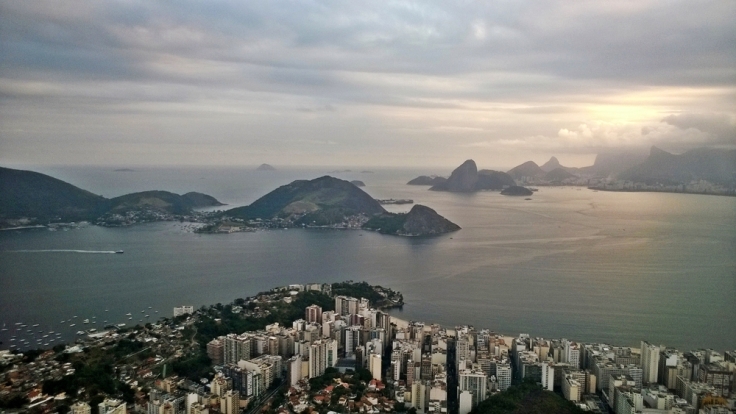 But returning to what I was saying about its architecture and look: I loved the paved streets, houses with beautiful fences and postboxes, sometimes in bright colors, small shops around, trees all over on the streets, sandy beaches and promenades, small squares for local meet ups, big wide avenues with impressive buildings… Maybe my memory is not accurate and the picture I describe is only applicable to the south zone of Rio and the center, but that is how I remember it – Mediterranean spirit, Valencia, Malaga, Barcelona come to my mind… I met a friend of mine from Italy, who was Brazilian and came to Rio to work during the Olympics. We met in 2014 in the very south of Italy (Reggio di Calabria) attending an Italian language course. Saying goodbye that September I really didn´t know if I would see Roberta again… but here we are, meeting in Rio! Life is truly amazing and always surprises me with beautiful people and unexpected encounters. We were both staying on Copacabana (close to Siqueira Campos metro station), so one evening we met with her and my friends and went to a local bar. Passing by the streets with all these cozy cafes and bars packed with people, seeing them sitting outside around the tables or simply staying with drinks in their hands, talking loud, listening to the music – all that was very dear to my heart! I know that this area only represents the “rich” Rio, but it is very lovely and has a lot of vibe.

Once after my volunteer shift I went with some local guy to a bar in Leblon. We were 3-4 volunteers I guess and we joined his local friends who were already sitting in the bar. Like maybe 5 more people. They were very young (around 18-22) and were apparently from some good and privileged families. I remember we were talking about life in Zona Sul (the south zone). They were saying that all their existence was in that area, all their friends, all their families, their schools and universities – everything was there. A neighborhood for rich people. They said they have never even been to other parts of the city and that they had no friends or acquaintances there. They had nothing to do with that world. And that´s how it is in Rio. This disparity and segregation have really struck me. Well, it´s nothing new that in every city there are some rich areas and some poor, and some neighborhoods are better for living than the others. But me, for example, I can´t imagine that there are some parts of Munich or St. Petersburg I would never go to. And that I would only be friends with people from my area. At home in St. Petersburg I have friends from all the areas, the address does not say anything to me. You can live anywhere and have good education, “social status”, opportunities, whatever, you know what I mean.

I have not been to favelas, because I could not decide if it was the right thing to do. Once when I was living in Spain I went to Corrida to see the famous Spanish tradition of bullfighting. It was a very cruel and sad “show” for me, I left in the middle of it because I really did not enjoy seeing animals bleeding and suffering. My curiosity was satisfied but I paid for the ticket and thus supported this inhuman act, so I kind of feel guilty. With the favelas it was not the same thing but my mind has raised a question, whether it was morally acceptable to do “sightseeing” where people just live and do their best to get their life together. There are some organized tours into favelas where you can walk around and even see homes of local people, but it feels very strange for me to take out my camera and take pictures of people´s homes. I guess if I was invited to a party in a favela (I was told Vidigal was a cool place), if I just happen to be there with some locals or even by my own, that would be probably fine to have a look, but doing it like an organized safari felt weird to me. (Walking around just by myself was too scary either) Nevertheless, you can see favelas from the top from many places (as they are all over Rio in no particular order) and I have seen them couple of times from different angles.

With my friends we went to Sugar Loaf mountain (Corcovado), probably the most famous spot in Rio. The views were stunning! I only had my phone camera and the pictures at sunset are very low quality, but I guess you can still see how insanely beautiful the view was… 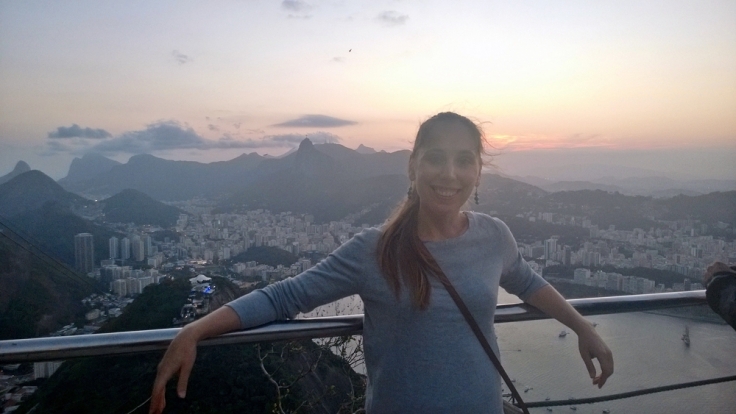 When my friends left I continued exploring Rio with my new and old volunteer buddies. One of the must sees in Rio is Santa Teresa neighborhood. I´ve been there twice: once with my friend from Munich who was volunteering as well and the second time with a new volunteer friend from France. There is a famous tram that takes you to Santa Teresa from the city center and I really wanted to have a ride! But for that you normally need to wait like 30-45 minutes. My Munich friend didn´t want to waste time on waiting and we went by foot. We walked a lot around the neighborhood and found a nice villa with open doors. We asked if we could enter the place and they said yes. Apparently it was a kind of “party house” for some British guests (people were arranging things and getting ready for some event)… I wish we got an invitation for the fiesta..hehe… but we got the view, that was anyway nice =) 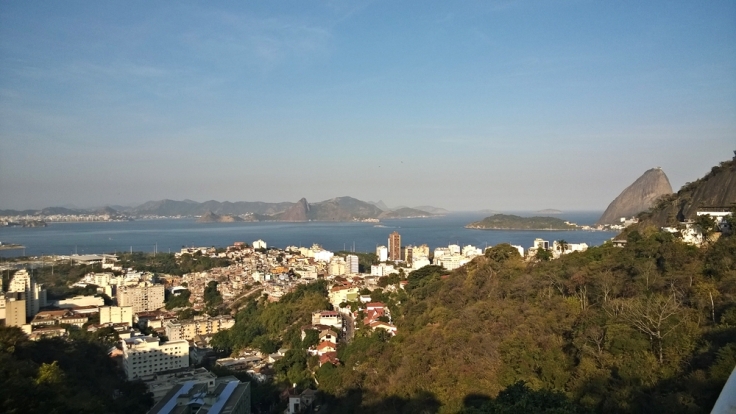 Here are some pics of the area and the yellow tram. At my second attempt I got that ride 😉 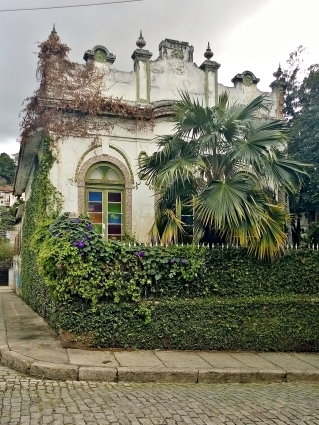 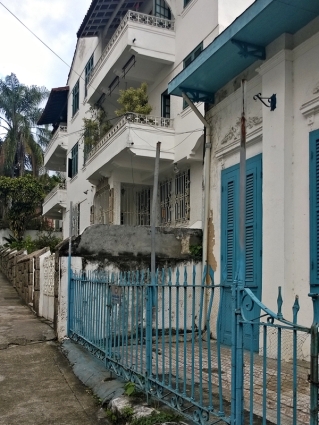 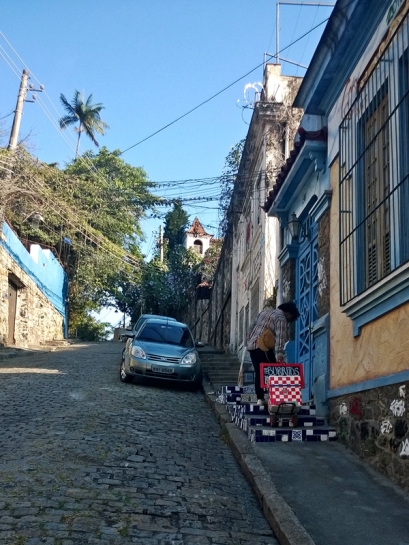 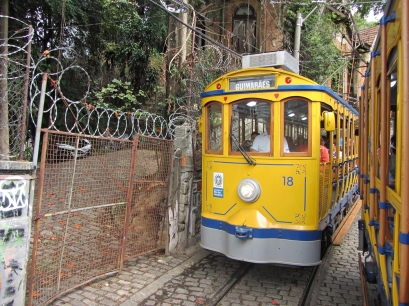 I have read a lot that Botanical garden should not miss on your list. To be honest I expected way more from it, but still it was nice to walk around. My favorite part was “palms alley” 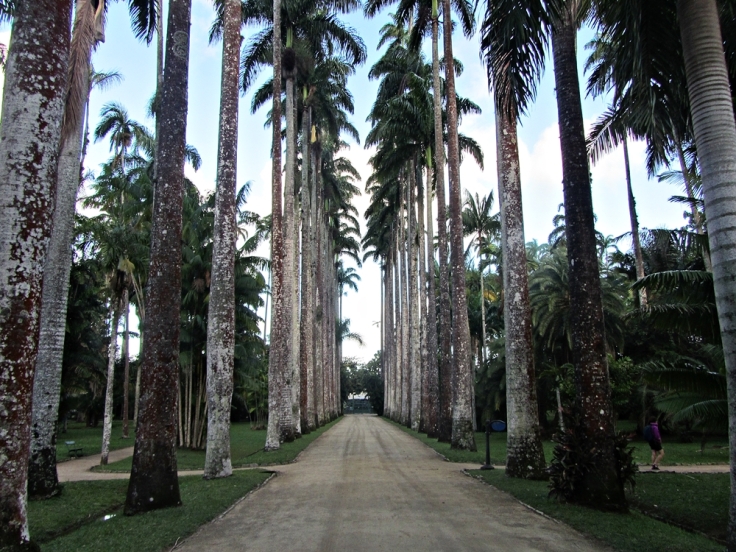 With Pauline (my French volunteer friend). 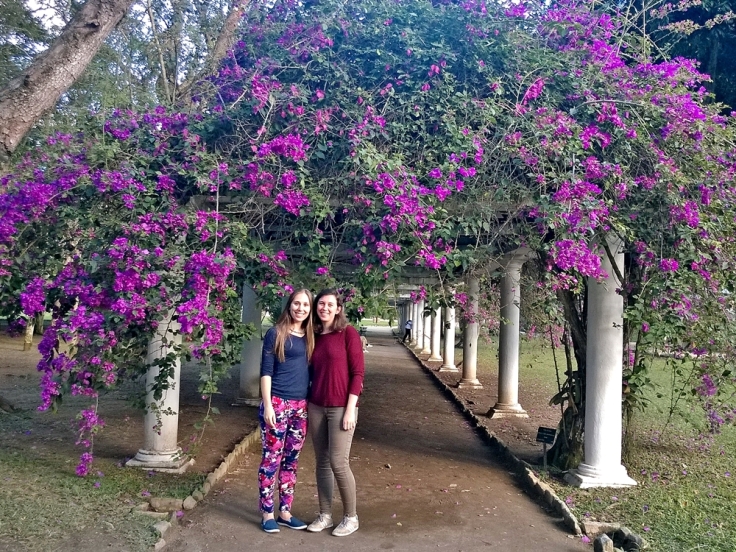 It has already become such a long read and I have not even told you my best stories. Ok, I´ll leave it at that… Rio the beautiful. In my next post I will tell you about my first scary day in the chaotic city, my life in the city center with prostitutes and about crazy night life with dancing till the sunrise. Stay tuned 😉