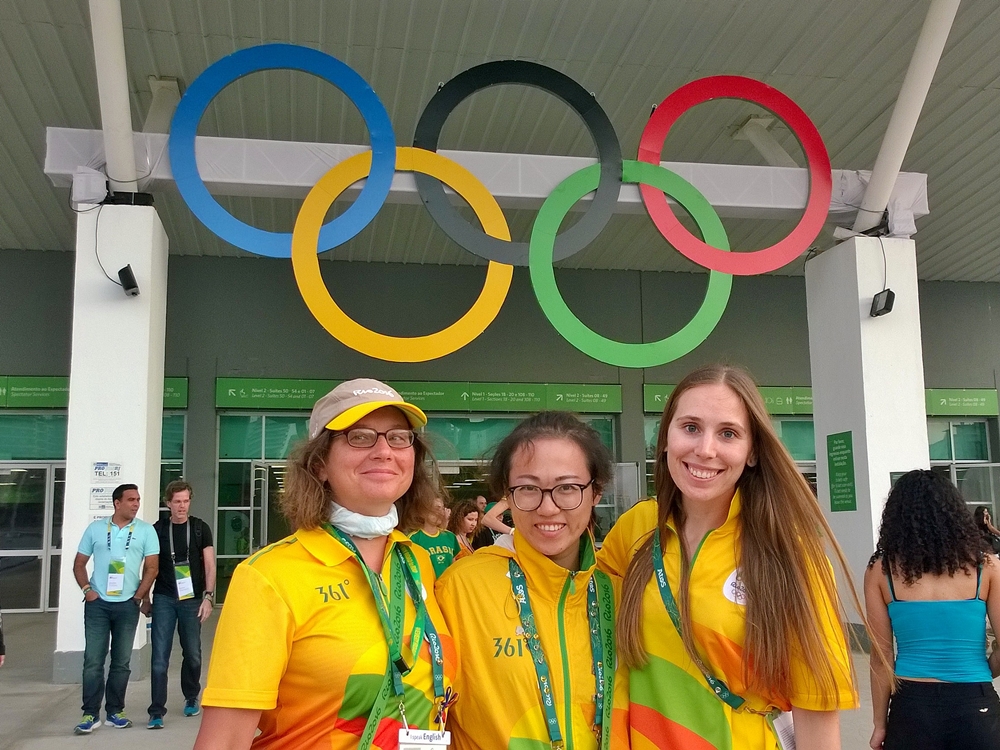 First question I get asked when talking about volunteering for the Olympics is whether they pay for flight tickets and accommodation? The answer is unfortunately no. (Though for me it was only partly “no”, but I will talk about it later). In general you have to arrange your flight and accommodation yourself, which I agree, is very discouraging. But don’t close this page yet! I will try to convince you that it is still doable and worth it 😉

As I said, flights and accommodation are not provided. Flights will most probably be very expensive especially if the games take place not on your continent. The thing is that by the time you get your final approval to be on the team, there will only be few months left till the games and so the prices will be sky high. I paid 1040 euros to get to Brazil from Germany,  after the games search engines were showing the price around 600 euros. You might try to book early in advance, but organizing committee highly advises you not to do so without your final invitation.

As for accommodation normally it is not provided and again you have to search for it yourself. When I looked for hotels in Rio around April there was almost nothing left and the ones available were extremely expensive! The cheapest hostel was around 30 euros in a dormitory (!) and it looked very ugly on the pictures. I guess the option that the majority of volunteers has used was AirBnb. Many volunteers found future room or flat mates in the facebook group and then booked apartments together. It is a bit risky (as you probably will have to transfer some money for the booked airbnb accommodation to some people you’ve just met online), but I believe that for the most people (from what I’ve heard) it worked well. Additionally organizing committee put up a special portal where local people could offer rooms and apartments for rent and you as a volunteer could book them. For me this way looked even riskier because the landlords always asked you for a deposit in advance while not providing any feasible confirmation of the booking. And though I understand that the landlords too need some kind of guaranty, talking to someone just by email and then transferring money to nowhere seemed like not a good idea to me. (With AirBnb you have at least a confirmation of booked apartment which can be shown to you by your new facebook friends). Furthermore, most of the offers on the portal were in Portuguese and if you don’t speak it the communication was not easy. So I would suggest going with AirBnb option and either booking a room on your own (the safest choice but more expensive probably) or an apartment with facebook people (skype with them first before making any payments).

In my case I got accommodation for free by winning a lottery. Yes, this happens 🙂 In the end of June I got an email from my future manager who offered those of us still without a place to stay to take part in a lottery. Couple of days later I was told, that I was lucky and would be provided with a bed in a hotel room! Yeii! However, we were warned, that the hotel would be far away from our venue. I thought that it didn’t matter (far away place is better than nothing) and took it. My additional motivation was to stay under one roof with other volunteers and to have fun with them after the shifts.

I have to admit that the hotel turned out to be too far away from the Olympic park. It took me everyday at least 1 hour 20 minutes to arrive to the park and then additional 30 minutes to pass the security, walk to my venue and check in. So every day I was spending around 4 hours just on the road! Looking at it now, I think that I should have booked something else. I would strongly advise future volunteers to consider the commute and to book accommodation close to their venues. Nevertheless, the location of our hotel was actually great for parties! The neighborhood was rather dodgy, but the best nightlife was waiting right around the corner.

What I want to add about the “lottery” is that in my opinion it was not a lottery at all. Surprisingly all the people who “won” this lottery were on the Language Services team and they were speaking either Russian, Chinese or Japanese! So I believe that the organizing committee really needed these volunteers and that’s why we got such a nice bonus. A friend of mine who had worked for a similar sport event told me, that such events always had some budget for demanded volunteers and I believe that in our case it was just that =)

Now when the part with costs is covered, I would like to talk about the benefits that you get as a volunteer. The obvious ones are the uniform (you keep it after the games), meals during the shifts and transportation in the city. Normally during a shift you were only supposed to have one meal and at check in they would give you just one voucher either for lunch or for dinner. I know that a lot of people have complained about this (and I totally support them because one meal is absolutely not enough if your shift is 8 hours). But the truth is that if you really wanted another meal you could just pass by the check in again and ask for another voucher. I’ve done it several times and I was always given a second voucher =) The food was not wow but quite ok! Water bottles were unlimited and you could take them any time. Transportation was covered with a special card that we could use for subway and buses. I have to say that I really did not spend much during my volunteer time! My only expenses were for occasional parties, some restaurants once in a while and for sightseeing. I forgot to mention that we had breakfast included in our hotel and it was very good: fresh fruits every day, delicious local pastries and some common stuff like eggs and cheese 😉

On the first day volunteers were given cool watch from Swatch brand and an “accomplishments” card. This card was like a game with different levels: every time you show up for your shift you pass to a new level and get a small present for that. You can see the levels and the crossings symbolizing my achievements on the picture below! 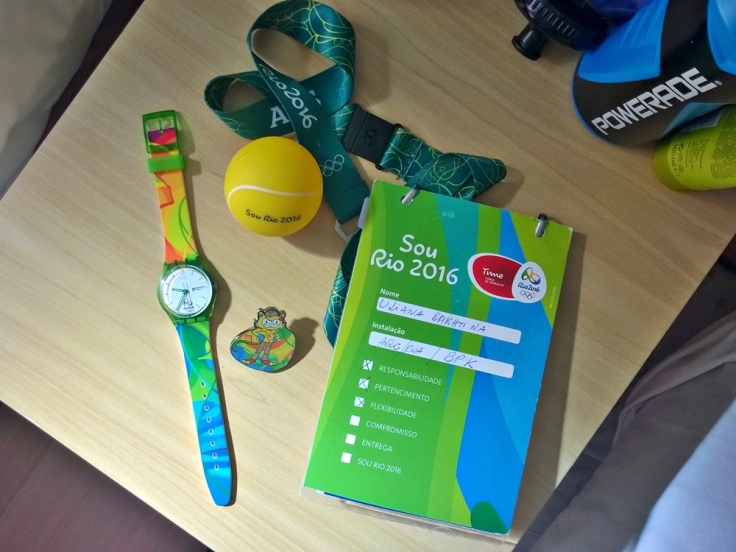 This one would have been amazing, but unfortunately I could not make it! Organizing committee has announced this offer only couple of days before the rehearsal. Unfortunately I was travelling around Brazil and was not in Rio at that time. If I had known it before, I would have definitely come to enjoy the show. For the future if I happen to volunteer again I will try to arrive some days before the start of the games, because I guess it might me a common practice to offer this opportunity to volunteers.

Well, that’s it for official benefits! But obviously the real benefits are much bigger: I had the opportunity to be very close to the competitions and interact with athletes, I have experienced “behind the scenes” of the Olympic games, I have watched many other competitions (a lot of fencing, gymnastics, tennis, and other handball and basketball games), made new friends, cheered for my country, partied around Rio and had a lot of fun! I will talk about my experience in detail in another post, so that you get a full idea of how it was to volunteer in Rio. Stay tuned!

ps If you have volunteered yourself and have something to tell about your experience, please share with others! I would like this page to be useful to future volunteers =)

My experience of volunteering at Rio 2016

How to volunteer for the Olympic Games

Volunteering at the Universiade in Taipei

One thought on “Volunteering for the Olympics: costs and benefits”