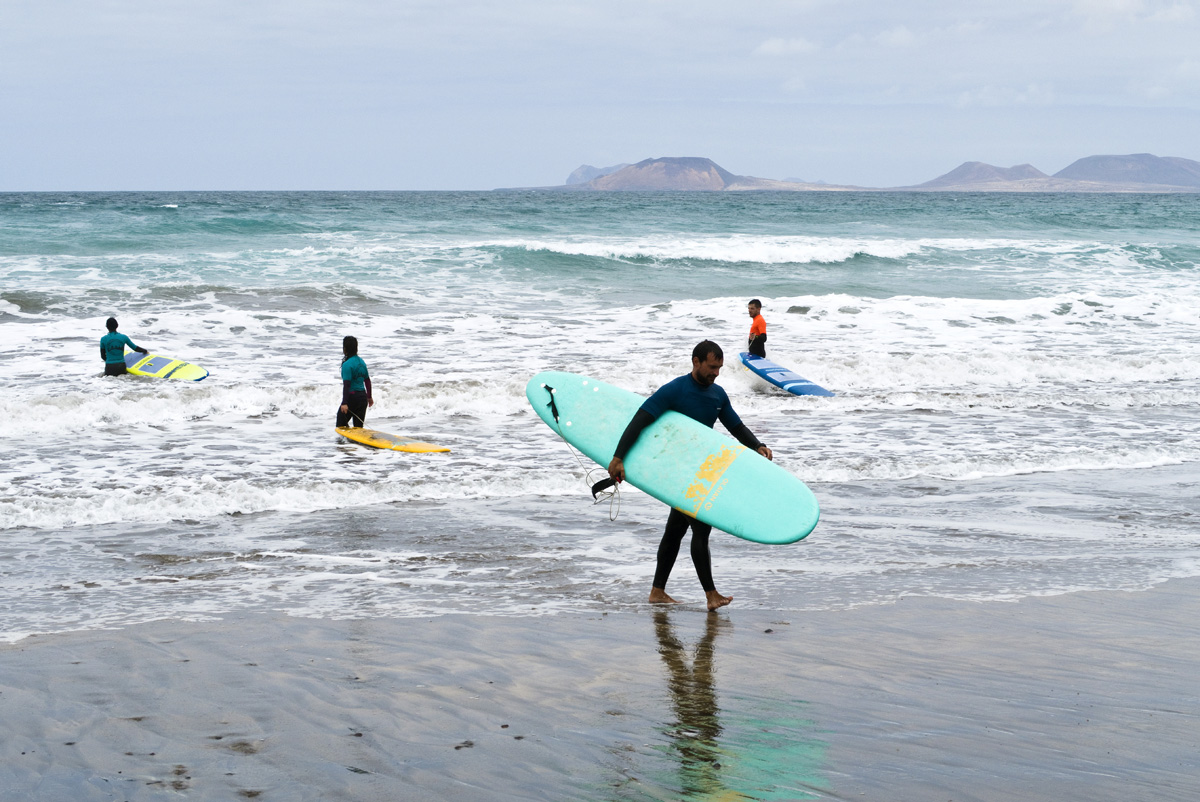 I have been willing to try surfing for many years. Every now and then I would come across a blog post about surf camps, get all excited and dream about that day when I would stand on the surf board and try to catch my first wave. During my university time I didn’t have money to afford a surf trip, then I started working but was dealing with some serious health issues… And then last year two friends of mine went to Fuerteventura to a surf camp and the desire to try it has reemerged in me stronger than ever. The health issues with my back pain were not really sorted out, but I still decided to buy a ticket to Lanzarote in February and to give it a try!

I was very scared. Scared in general to try this new activity and scared that my back would fail me. But I made a pact with myself, that I should go and try it anyway. And if at some point I realize that my body is not coping with the load, I would just enjoy Lanzarote sitting on the beach and reading some nice book. That’s it. (Oh well … easier said than done. My brain was bombarding me with the thoughts that all of that was a crazy idea and I should have just stayed at home). I have tried to find some company among my friends, but no one was willing to join me. Being solo in my adventures has never stopped me before, so I packed my 6kg backpack thanks TUI for being so generous with hand luggage and went off to Lanzarote on the 30th of April 2019.

Around one month before the departure I booked my 3 days surf course with the school “Surf Insight”. I have made my choice based on the many good reviews on Trip Advisor and I was not disappointed! At first I wanted to have a 4 days course, as I had 4 full days in Lanzarote. But when I wrote my inquiry to the school, they answered that my schedule would be 2 days surf course, then 1 day off, then 1 day surf course again. And thanks god that was the schedule! I really needed that one day off in the middle =) The course price for 3 days was 159€ and the accommodation for 5 nights was 171€ (I booked the accommodation with the school as well). I got a whole apartment with several rooms just for myself!

My thoughts during the first 10 minutes:
“That surf board is so damn heavy! I have only walked from the truck to the water and I am already tired ;/”

During the next hours I was trying to enter the water, reach the spot from where I could attempt to paddle and then to stand up. That was hard. VERY HARD! After every attempt (when you end up very close to the shore) you need to get back into the water and reach a place where it would be around waist deep. Walking through the water till that place is exhausting! You need to fight against the waves that break into your face and pull you back to the shore and you need to carry this monster surf board that sometimes slips out of your hands, flies in the air and hits you (ouch! it hurts!). By the time I was reaching my “starting spot” 75% of my energy was already gone! But then you have to jump on the board, paddle as fast as you can and pop up. As you might have guessed, doing so with 25% of energy left was almost mission impossible. Nevertheless I managed to pop up 3 times on my first day! I was told it was a good result (not sure if it’s true)

Surfers entering the water and overcoming the waves:

My instructor was constantly asking me: “Are you having fun? Do you like it?” All I wanted to answer was: “I am f*cking exhausted!!! Can I go home now??”. But well, I thought that would be impolite so I kept saying “Yeah, it’s kind of cool … even though very tiring”.

Early morning thought of the day: “Why am I doing it to myself?!”

The second day went the same way as my first one. I was trying to reach the right place, find the right wave and then try to catch it. The waves were crushing into my face, ears and nose, the board was flying away and hitting me and the rocky sea bottom was scratching my feet and knees when I was dragged by the wave every time I fell down. Additionally I got blisters on my hands which hurt a lot (common thing for beginners on the so called soft boards). I had no power in my body to jump on the board, paddle, press up and stand up. Every attempt to do so was painful, I had to squeeze all the energy left in me for those movements… and in 95% of cases it led to nothing. Just to hearing my instructor saying: “”Get back to the water, do it again, come on!”

In the end of the surfing day I literally could not pull off my school shirt (all students get them on top of the wetsuit to be distinguishable in the water). I was trying to lift my arms and take it off but I could not! Someone had to help me because I was absolutely uncapable of producing any further movement with my arms. I was tired, exhausted, drained of all energy and no, I was not having fun

Thanks god it’s a day off! Best decision ever!!!

I went to the beach to take some photos of surfers and to walk around the village Caleta de Famara.

The beach in Famara is breathtaking! So beautiful!

Everything in Caleta de Famara is about surfing: surf shops on every corner and wet suits on every balcony.

The village itself is tiny. This is the main street and by the end of it the village is over.

Early morning thought of the day: “It’s the last day of surfing, yeiii! Just a bit more of suffering and I am done =)”

Today the instructor told us we would try to reach the line up – the place where normal surfers start catching unbroken ways. That meant that we would need to swim further away from the shore to the place where we would not be standing on the bottom anymore. In order to do so we needed to pass the waves pulling us back to the shore. We were shown two techniques to do so – press up and turtle roll. Short practice on the beach and here we go for the line up!

That was (#%)#%#*% hell! Remember I told you walking in the water with the board was hard? Well, swimming with it was 5 times harder! The waves kept crushing over me, I was trying to do the press up (no chance, I just didn’t have that much power in my arms even though I thought I did), so my only option was the turtle role. This means you need to roll under the board and let the wave pass over you (you stay under water) and then you need to turn again and get back on the board to paddle. Dozens of times! Because one wave comes after another and you just dive under the wave, get back to the surface, try to get on the board, paddle a bit, then dive again… And if your turtle role is not good enough the wave pushes you back to the shore with all its power. It seemed like and endless fight to pass these waves and to get to that line up point.

I think it took me 20 minutes to do it and I was about to cry.

From this line up you are supposed to wait for the right wave and then to catch it. Oh well. I was just lying there on my board with zero power and no will to attempt anything. After some rest I tried however to “catch” a wave, it was (obviously) a disaster and I happily let the wave drag me all the way to the shore.

In the afternoon I went back to my beginner white (broken) waves an tried to do some pop ups.

Me carrying the board back to the water:

When my last day of surf course was over I was so HAPPY! I did not expect it to be easy, not at all, but it was much much much harder than I imagined. I am super proud of myself that I did it. I showed up every day to continue the fight with the waves and I never quit. I am extremely grateful as well to my body that it kept up with the load and allowed me to do it.

I can’t say surfing was fun and exciting and wonderful… I wish I could. It was a lot of hard work and not so much reward. However, I think I am willing to give it another chance. Maybe somewhere in a warm tropical place like Bali or Sri Lanka. We’ll see. What I can definitely say is that as an experience it was absolutely worth it! Feeling the power of the ocean, testing my limits, overcoming my physical and mental boundaries and learning something completely new gave me so much inspiration to live and explore!

If you are like me and are willing to try surfing, then do it. Even if it never becomes your favorite sport there is just something amazing in trying it out and challenging yourself 😉